http://www.stuff.co.nz/national/87981623/israel-warned-new-zealand-that-un-resolution-was-declaration-of-war–report Israel warned New Zealand that UN resolution was ‘declaration of war’ Let me be very clear. It is the Government of NZ who is illegitimate  and with NO mandate from Maori Sovereignty who voted. It is they who has incurred the return of their curse upon themselves, NOT the people of  New Zealand.  It is these few who are at war with GOD, creation and humanity, being with the NWO  and not the people of New Zealand and certainly not with the TeManawa the CHRISTOS, CHRIST, nor with ISRAEL
http://www.radionz.co.nz/news/national/321193/nz’s-israel-resolution-peacemakers-seldom-win-friends NZ Govt at war with God. Letting Muslims take over Christian Holy sites IS NOT PEACE, TO START WW3 IS NOT PEACE TO ATTEMPT TO FORCE THE BREAKING OF GODS COVENANT WITH ISRAEL IS NOT PEACE
nzherald.co.nz/business/news/article.cfm?c_id=3&objectid=11774860 … Netanyahu has bigger fish to fry than NZ; MSM twist truth. NZ vote declared war on ISRAEL and on God.

http://www.stuff.co.nz/the-press/opinion/87987561/editorial-new-zealand-takes-a-brave-position-on-israel NZ Gov yes people to NWO. It is neither brave nor wise to declare war on Israel, attempt to enforce breaking the covenant of God with Israel. It is simply quite belligerent and foolish

http://www.newshub.co.nz/home/politics/2016/12/israel-move-could-harm-nz-trump-relations-expert.html Israel move could harm NZ (GOV)-Trump relations – expert; Not with TeManawa or the People

http://www.israelnationalnews.com/News/News.aspx/222384 … King David’s response to the UN’s anti-Israel resolution. From Heaven to Earth and from Earth to Heaven is enforce now. Cease placing these  circumstances out there or up there as it is time to bring it to earth consciousness now where it actually is  and where the AUTHORITY OF BOTH also is.

Trump Urges Israel To Hold On & That Help Is On Its Way … Isaiah 42:1 | View whole chapter | See verse in context

Behold my servant, whom I uphold; mine elect, in whom my soul delighteth; I have put my spirit upon him: he shall bring forth judgment to the Gentiles.
http://www.politico.com/story/2016/12/senate-republicans-denounce-united-nations-israel-233076 … Senate moves to condemn U.N. over Israel
https://www.youtube.com/watch?v=Q8ZGhLPXK4c
Obama/Soros Launch Plan To Destroy Israel; REJECTED BY GOD. RESTORATION WILL BE PLACED
http://www.radionz.co.nz/news/world/321462/nz-aus-division-opens-up-over-israel YEP NZ FELL 4 THE OBAMA SOROS KERRY DIVIDE CAUSE CHAOS
stuff.co.nz/world/middle-east/88000771/amid-tensions-with-nz-israeli-minister-lashes-us-secretary-of-state-john-kerry-for-pathetic-speech … GULLY KERRY OBAMA AGAINST GOD AGAINST ISRAEL AGAINST PEACE GO TO WAR AGAINST CHRISTIAN WEST
http://www.telegraph.co.uk/news/2016/12/29/theresa-may-rebukes-us-attack-israel/ … Theresa May rebukes US for ‘inappropriate’ attack on Israel
http://www.stuff.co.nz/national/87981623/israel-warned-new-zealand-that-un-resolution-was-declaration-of-war–report illegitimate NZ Government supports NWO meaning terriost, meaning supporting NWO agenda to start  WW3, Meaning China and ISLAMIC take over globally SHARIAH LAW and enslavement of humanity , meaning they have sold their souls to the devil for a few pieces of silver, meaning they are at war against  GOD, humanity and creation. Those involves have invoked GODS JUDGEMENT  on themselves and the curse they have made upon their countries is returned to them NOT THEIR COUNTRY OR ITS PEOPLE They have angered  GOD with their acts of war against GOD and GODS OWN. Let me be very clear ISRAEL, TeManawa The Christos does not  uphold them or their deeds anymore than GOD does. Let me also say this;  THE KINGDOM IS WITHIN AND GODS PEOPLE ARE THOSE WHO KNOW IT AND KNOW GOD.  These ones are spread throughout the Nations of the World thus not all are Jewish. One must accept  Mary and Jesus The word of God as names of the Age past and the NEW NAMES have been given for CHRISTOS/CHRIST WORD OF GOD IN THIS AGE (Not the version of man but the reality). ISRAEL is for all those  whom so believe, know and are known to GOD
https://www.youtube.com/watch?v=BfwEduAPe-w

44In the days of those kings, the God of heaven will set up a kingdom that will never be destroyed, and this kingdom will not be left to another people. It will shatter all these kingdoms and bring them to an end, but will itself stand forever. 45And just as you saw a stone cut out of the mountain without human hands, and it shattered the iron, bronze, clay, silver, and gold, so the great God has told the king what will happen in the future. The dream is true, and its interpretation is trustworthy.”

44 “In the time of those kings, the God of heaven will set up a kingdom that will never be destroyed, nor will it be left to another people. It will crush all those kingdoms and bring them to an end, but it will itself endure forever.
THE RESTORATION – GOD’S OWN KINGDOM AOTEAROA GOD’S OWN COUNTRY  – THE NEW JERUSALEM

Then Jesus said to those Jews who believed him: If you abide in my word, you shall truly be my disciples. And you shall know the truth: and the truth will set you free. They answered him, “We are offspring of Abraham and have never been enslaved to anyone.”(John 8:31-36) SEAL OF THE LIVING GOD – Te Manawa The Heart defender of the faith, Gods live sovereign de jure and sovereign de facto of the Age (TM) #MotheroftheWorld #MotheroftheNations #Christos of the Age – The living stone. Logos, word of God, Christ Yeshua 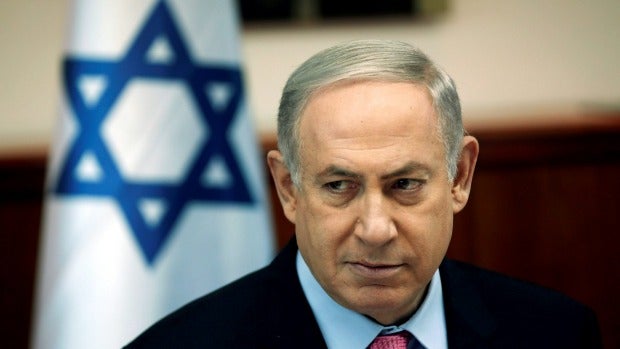 A writer in a US Jewish publication says this country is blaming Israel for its own failings, after New Zealand’s prominent role in a United Nations resolution on Israeli settlements in Palestinian territory.

“New Zealanders are no strangers to settlements – or to the cavalier denial of the rights of an indigenous people in their historic homeland,” Liel Leibovitz wrote in Tablet.

He suggested indigenous peoples of the world, including Maori, could benefit from the technology, organizational capacity and experience of the Jewish state. Israelis were the “ultimate indigenous survivors”, he said. 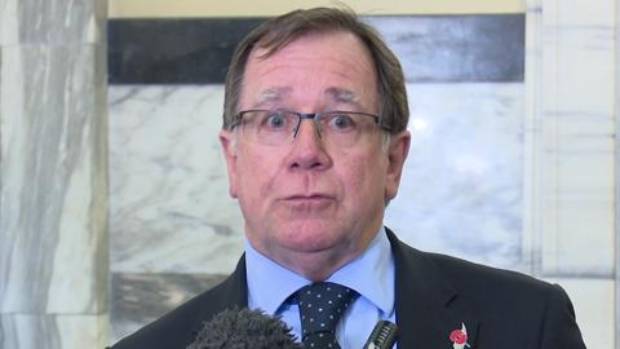 “Given the brute ugliness of its colonial past, New Zealand seems like an excellent place for the diplomats in Israel’s Foreign Ministry to try out a new model that puts solidarity with other indigenous peoples on an equal footing with traditional government-to-government relations.”

Approached for his thoughts on the article, Auckland University of Technology history professor Dr Paul Moon said it seemed to be a work of satire. 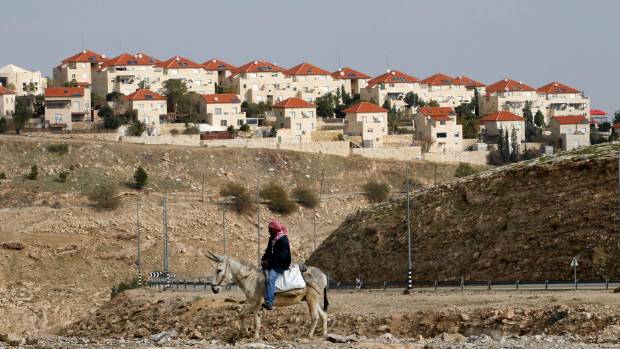 A Palestinian man rides a donkey near the Israeli settlement of Maale Edumim, in the occupied West Bank.

The case being made was so extreme and deliberately paralleled, he thought, the points of the UN Security Council resolution.

“It’s not a serious piece in the sense it’s historically accurate, but it’s certainly serious in the point it makes,” Moon said.

That point was to turn the issue around to see how New Zealanders would feel if foreign governments voted on New Zealand’s internal affairs in the way they had voted on Israeli issues. 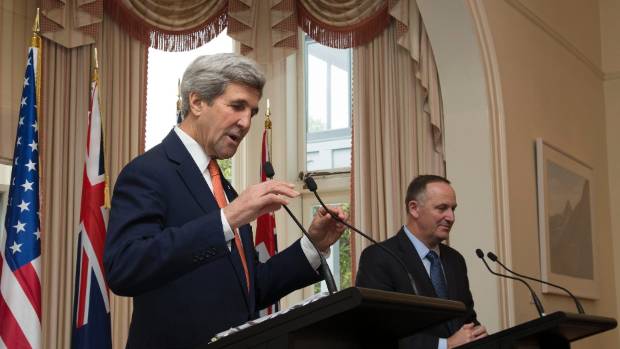 US Secretary of State John Kerry and former Prime Minister John Key in Wellington in November.

“More than anything, there’s a mixture of anger and disappointment with what New Zealand has done, with good reason in a sense,” Moon said. Israel was the only country in the region that supported such concepts as gender equality and gay rights, while the regime supported by the resolution “is against everything we stand for”.

There could be economic reasons behind New Zealand’s decision, given this country has comparatively little trade with Israel, compared to other countries in the Middle East, Moon said.

“What is concerning is the forcefulness with which New Zealand has gone into this.”

The UN said that in the resolution last Saturday (NZT), the Security Council reaffirmed that Israel’s establishment of settlements in Palestinian territory occupied since 1967, including East Jerusalem, had no legal validity.

It also constituted a flagrant violation under international law and was a major obstacle to the vision of two states living side-by-side in peace and security, with internationally recognised borders.

The proposal was originally prepared by Egypt, but that country dropped it after US President-elect Donald Trump called on Egyptian president Abdel Fattah el-Sisi to do so.

The resolution was picked up and sponsored by New Zealand and three other non-permanent members of the Security Council – Malaysia, Senegal and Venezuela.

It was supported by 14 of the 15 members of the council. The US abstained rather than veto the resolution, which would have been in line with its longstanding practice when Israel has been targeted over the settlements.

Israeli publication Haaretz has reported that before the vote Israeli  Prime Minister Benjamin Netanyahu had a “harsh” phone call with New Zealand Minister of Foreign Affairs Murray McCully. “If you continue to promote this resolution from our point of view it will be a declaration of war,” Netanyahu has reported to have said.

In his Tablet article, Leibovitz said that if the principle of two states for two peoples was good enough for most Israelis to willingly accept, it was surely good enough for New Zealanders “who have already agreed to a division of their own land with the Maori – and then wantonly violated their own legally-binding agreements”.

http://www.jpost.com/Arab-Israeli-Conflict/Esteemed-Israeli-archeologist-censured-at-Temple-Mount-477451
Esteemed Israeli archeologist censured at Temple Mount one of the Wakf guards tried to listen to my explanations, and when he heard the words ‘Temple Mount,’ he got upset,” Barkay said. “The policeman told me he had to accept the complaint, so I used the letters ‘TM’ going forward to describe the site,” he said;. GOD WORKS IN MYSTERIOUS WAYS, YOU SEE TM IS THE VERY HEART OF JERUSALEM. AS ALEX JONES LIKES TO SAY COULD NOT MAKE IT UP IF I TRIED; A SIGN. SEAL OF THE LIVING GOD – Te Manawa The Heart defender of the faith, Gods live sovereign de jure and sovereign de facto of the Age (TM) #MotheroftheWorld #MotheroftheNations #Christos of the Age – The living stone. Logos, word of God, Christ

THE LOST TRIBES ARE NOT LOST AND WHERE THEY ARE MEANT TO BE RIGHT NOW. THEY CAME FROM THE BIG ASSEMBLY ARE KNOWN – TM

“For behold, I am commanding, And I will shake the house of Israel among all nations As grain is shaken in a sieve, But not a kernel will fall to the ground

“I will make you a light to the nations, that my salvation may reach to the ends of the earth.” The light of Israel is seen in the Light of the World, Jesus Christ. John pointed this out as he calls Jesus the “Lamb of God.”

TeManawaTheHeart #LetsDoItRight@TeManawa1·5hhttps://dailystar.co.uk/news/weird-news/mysterious-glow-appears-above-jesus-21428668 The golden glow shines above Jesus Christ’s home of Nazareth in Israel – flashback the glory of God was placed over IsraelMysterious glow appears above Jesus Christ’s childhood home of NazarethThe famous Serbian pop-folk singer said the trip to the Holy Land gave her a ‘highly spiritual experience’ as she shared the footage with her fans onlinedailystar.co.uk 4th Feb 2020

https://banned.video/watch?id=61258e2992e112699e484cb3 ULTRA VACCINATED ISRAEL ADMITS ITS MOST OF THE VACCINATED THAT ARE SICK – ISRAEL WHAT HAVE YOU DONE